Rating: 8.0/10.
Users’ Rating (Click a star to rate this gun.)
Rating: 7.7/10. From 27 votes.
Please wait...
Summary: Dave Spaulding’s review and rating of the Glock 38 pistol, including a photo, range report, pros and cons, and pricing. (Click here to see all Spaulding’s gun reviews.) 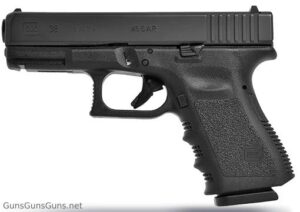 Glock has developed a .45-caliber cartridge that fits in a 9mm-size gun. Called the .45 GAP (Glock Auto Pistol), this cartridge is basically a .45-caliber bullet in a 9mm-length case. Glock developed the cartridge from the ground, but a number of other firearms manufacturers now make guns chambered for this new round. Most ammunition manufacturers build .45 GAP ammunition in a variety of full-metal-jacket training loads and hollow-point defense loads.

I took delivery of all three Glock pistols chambered for this new round and tested them on the range at the Tactical Defense Institute (TDI) in southern Ohio. The three models include the full-size service pistol model 37; a concealed-carry version called the model 38; and a deep-concealment sub-compact called the model 39. For readers familiar with the Glock pistol line, these three guns are similar to the 9mm Glock 17, 19 and 26.

The 37 will find great favor with uniformed patrol officers who carry their service sidearm in a duty style holster suspended from a 2.25″ duty belt. The 38, which was my favorite of the three, measures a ½” shorter in length and not quite ¾” shorter in height. I found this gun to provide the perfect compromise of shootability and concealability, while still large enough to fit in a duty holster. To me, the 38 is the best all-around .45 GAP pistol currently made.

That said, I will not be surprised if the sub-compact model 39 ends up the most popular model of the three. This palm-size gun was easier to shoot than I thought, and it was still small enough to tuck into a waistband under a t-shirt or into the pocket of a large overcoat like a winter parka. I think the short grip length will restrict this gun’s use as a duty pistol, but it will find great favor as a backup and off-duty gun.

It appears that the frames used for the 9mm, .40 SW and .45 GAP pistols are the same, but the GAP slides are slightly wider while maintaining the same length as their 9mm/.40 SW counterparts. This is likely due to the wider cartridge the slide must house.

Test ammo supplied by Remington, Corbon and Federal came in a variety of bullet styles and weights. It appears the manufacturers use the same bullets in the manufacture of .45 ACP ammo as they do the.45 GAP. The velocity of the .45 GAP runs just about the same as comparable .45 ACP loads.

During a sunny Friday afternoon, the TDI training staff and I fired a total of 500 rounds through each Glock .45 GAP without a single malfunction. Although I had no way of accurately measuring, it appeared that the .45 GAP has less felt-recoil than the .45 ACP. (I admit this may be nothing more than an individual perception on my part, but at the same time, is not perception everything?) Regardless, rapid-fire drills, such as clearing a Bianchi plate rack, proved quite easy to accomplish, and no one expressed concern about blast or felt-recoil impulse. (Actually, one shooter stated, “This feels quite similar to the .40 SW.”) And the .45 GAP cartridge proved more than accurate enough for police service, shooting 3″ handheld groups at 50 feet.

Like all Glock pistols, these utilized simple, reliable Glock trigger mechanism, and they came with a white dot front sight and a white outline rear. At my age, I have found this sight system too white; all I see it a glob of white instead of a crisp sight picture. These sights are also plastic and susceptible to damage when used in the rough world of law enforcement operations. Fortunately, you can order all Glock pistols from the factory with a set of high-quality night sights that are made of metal and offer a very sharp sight picture, even for those of us with aging eyes.

All three test guns were also equipped with the updated slide-release lever that permits the shooter to release the locked slide with either their shooting-hand thumb or support hand. When Gaston Glock originally designed his pistol for the Austrian Army, he intended shooters to accomplish all slide manipulations with their support hand. However, American shooters, many of whom were trained on the 1911-style pistol, seem to prefer releasing the slide with the support-hand thumb. The larger slide-release lever allows for this very “American-style” action.

Would I change anything about the .45 GAP pistol? I would put a longer magazine release button on the gun—something that’s available from Glock. My short hands have difficulty reaching the standard button, so a longer version helps me eject spent magazines more reliably without having to shift the gun in my hand.

Other than the night sights I mentioned above, I would be very happy with any of the Glock .45 GAP pistols. They are easy to carry, easy to shoot and come in a caliber that will, without a doubt, end up “street proven.”