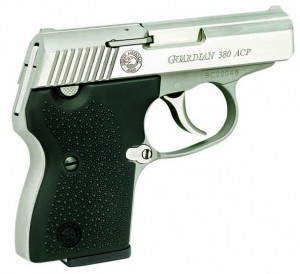 A stock Guardian 380 with fixed sights.

Pocket pistols are hot tickets nowadays. Manufacturers of pocket .32s, .380s and 9mms are huffing and puffing to keep up with the demand for handguns you can carry comfortably concealed almost anywhere.

One of the pioneers in this trend has been a Utah-based company named North American Arms (NAA). NAA produces a number of pocket-size guns, including a semiauto chambered in .380 ACP called the Guardian 380.

I had the opportunity to evaluate over a long period of time two Guardians 380s, including a stock, out-of-the-box unit, and a factory customized unit with Novak three-dot night sights and scalloped slide serrations. I’ve recorded my impressions below.

The Guardian 380 is constructed with 17-4 pH stainless steel and wears black rubber grips. California-ready models include an internal lock safety.

This pistol is double-action-only (DAO). This means one full pull of the trigger both cocks and drops the recessed hammer. (Thus, the gun has second strike capability.) The trigger pull comes in at around 10 lbs. It feels heavy, but it’s smooth, and it does lighten up and get even smoother after you put rounds through it or just dry fire the gun a lot. 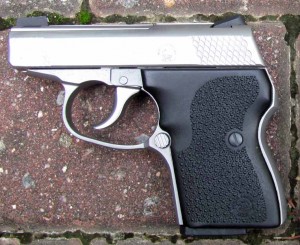 The author’s custom Guardian 380 with combat sights dovetailed into the slide, and slide serrations front and rear.

As with a revolver, it requires intent to press the trigger through its full range of motion to discharge the gun. This is a safety feature. Also, you must allow the trigger to travel all the way forward to reset for the next shot. Anything less will short-stroke the action. Given the weight of the trigger pull, if you practice firing multiple shot strings over a good practice session, your trigger finger will get a good workout.

Given the actual weight of this gun (18.72 oz. empty), its perceived recoil is on the stout side, but it’s manageable. The factory stock models with minimalist, fixed, non-adjustable iron sights are well suited for close-in work, not for extended range shooting. These are proverbial belly guns designed for point and shoot. On the other hand, factory custom guns equipped with the optional, factory installed Novak three-dot combat night sights provide combat accuracy out to 7-10 yards.

Both of the Guardian 380s I tested were well constructed. They are built like trucks, but they look like fine jewels and function like fine Swiss watches. I had the opportunity to visit the NAA factory in Provo, Utah, several years back. The NAA factory has state of the art machinery and many components of these guns are hand fitted. NAA also offers a lifetime warranty.

I ran more than 500 rounds of a variety of full metal jacket (FMJ) and jacketed hollow point (JHP) ammunition through each of these guns over a period of a year and a half. I field stripped and cleaned the factory stock gun (easy and simple to do without tools) at 250 rounds. I cleaned the factory custom gun at 400 rounds.

Both guns shot to point of aim. Group sizes at 5-7 yards with rapid fire averaged around 8″. With slow, sighted shooting, group sizes were reduced by about 2.5″. However, these Guardians need to be shot like your life depends on them (i.e., rapidly, with a crush grip). Do so, and they will perform for you. That’s what these guns are made for.

The factory custom gun suffered a total of nine malfunctions or stoppages. Eight of these occurred during the first 200 rounds. Only one (a failure to chamber) occurred during the second 300 rounds fired over three range sessions. Two hundred rounds appear to be a good break in period for these guns.

Neither Guardian 380 demonstrated a preference for ball or JHP ammunition. The guns performed equally well stoked with Fiocchi and Federal American Eagle ball ammunition, as well as with JHPs that included Federal, Winchester Silvertip, Speer Gold Dot and Corbon.

I’ve also run more than 500 additional rounds through each Guardian, including hot Corbon loads. I’ve suffered no additional stoppages. Both pistols are well broken in. I now can trust either of them as my primary every-day-carry gun when something bigger won’t do.

As Sandy Chisholm, NAA president, has accurately pointed out, stovepipes that occur after firing the last round with an emptied magazine aren’t stoppages. Because the slide doesn’t lock back on an empty magazine, the empty casing of the last discharged round reveals the gun is empty and ready for an empty reload or emergency reload as the circumstances dictate. This is easily accomplished by ripping out the spent magazine (I put it in my pocket), working the slide to clear the empty casing and anything else present, tapping a charged magazine into the gun (it’s judicious to always carry at least one spare), racking the slide to chamber a round and proceeding as circumstances dictate (e.g., bang, ready, scan, etc.). 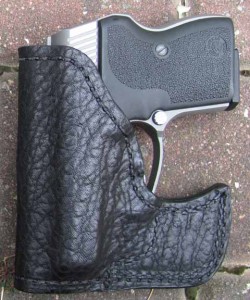 The author’s stock Guardian in his Alessi holster.

I’ve been carrying one or the other Guardian in a sharkskin pocket holster kindly provided by Alessi Holsters for a total of four years now. The Alessi pocket holster keeps this gun right side up in my pocket, and the holster stays in place when I draw the gun.

It’s easy to get used to carrying the NAA Guardian. Within a short time, you forget the gun weighs 1 lb., 4 oz. loaded. I have become quite attached to my NAA Guardians. The Alessi pocket holster has shown little wear despite the sweat and lint in my pocket and drawing these pistols out of my pocket hundreds of times. You must carry this gun in a holster because otherwise it does somersaults in your pocket. Plus, you want the trigger guard to be covered.

When you carry the all steel Guardian 380, you feel you have a substantial gun in your pocket because you do. Yet, the gun is well concealed. This is both comforting and comfortable.

I highly recommend the Guardian 380 for portable covert protection. They are good looking, strong, durable and reliable.

However, recognize that no one gun is for everyone. That’s is why there are so many fine defensive handguns on the market. People who are recoil shy or who have hand-strength issues would be better served with a softer shooting gun that has a lighter and shorter length of trigger pull and less felt recoil. Perhaps a traditional double-action/single-action pocket pistol, a pure single-action pocket pistol such as the SIG Sauer P238, or maybe a double action .22 LR or .22 WMR snubnose revolver.

The NAA Guardians are built to last several lifetimes. Carry one or two of them all the time as your every day carry, and your lifetime should be a long one.